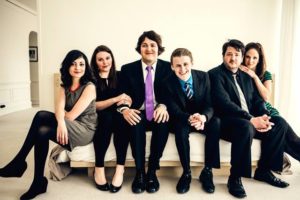 Running until December 21, The Second City’s Nut-Cracking Holiday Revue is now playing at the famed La Jolla Playhouse. Last summer saw the immensely popular run of The Second City’s original show, The Good, The Bad and the I-5. This year, the hilarious new wild and wacky Nut-Cracking Holiday Revue production showcases holiday songs, sketches and improv that will have you laughing until the end.

The Second City’s Nut-Cracking Holiday Revue is being touted as the ideal solution to the boring annual office party. Come be a part of this exciting show where audience members are called upon for suggestions and brought up on stage. This hilarious La Jolla event is incredibly entertaining and touches on subjects ranging from marriage to families to other hot topics.

The Second City started in Chicago in 1959 and has grown to become a huge player in the improv/sketch comedy genre. They have theaters and training centers in Chicago, Toronto and Hollywood are often referred to as a “comedy empire.” There are almost a dozen touring troupes that perform full time, along with a TV and film department and a corporate communications division. And now, they have made their way to beautiful La Jolla to entertain you! This year’s show features six members of the comedy troupe who are versatile and extremely talented.

The Mandell Weiss Forum at The La Jolla Playhouse is set up in a unique way for this special show. The 400-seat theater features a thrust stage that lets audience members surround it on all three sides. This allows for optimal viewing and there isn’t a bad seat in the house!

Enjoy a night out in beautiful La Jolla, see The Second City’s Nut-Cracking Holiday Review and have dinner at one of the many delicious restaurants in The Village. Don’t miss this holiday show with plenty of toasts and roasts!

To purchase tickets to this La Jolla event, visit www.lajollaplayhouse.org/holiday-revue.