La Jolla’s Salk Institute: What’s it all About?

“The reward for work well done is the opportunity to do more.” – Jonas Salk

Right near the world-famous Torrey Pines Golf Course lies the Salk Institute for Biological Studies in beautiful La Jolla. Created in 1960 by Jonas Salk, who came up with the vaccine for polio, the Salk Institute is a pillar for molecular biology and genetics research. It is where cures begin.

The Salk Institute builds on its past successes over the last 50 years and today is an incredibly inspiring and rewarding place for researchers to work in. Focus revolves around molecular biology, neurosciences and genetic and plant biology. Salk consistently ranks among the leading research institutions in the world and employs more than 850 visiting scientists, postdoctoral fellows and graduate students. Five scientists that trained at Salk have won Nobel prizes and Salk is home to 14 members of the National Academy of Sciences and nine Howard Hughes Medical Investigators. Pretty impressive! 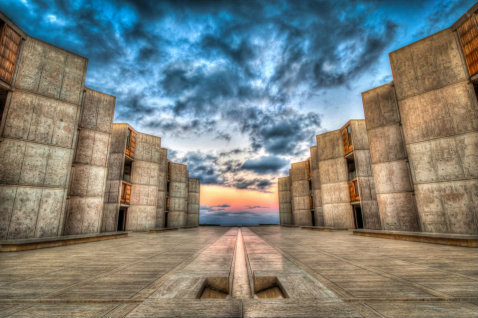 Photo courtesy of The Salk Institute

The Salk Institute is centered around an open courtyard built of exquisite travertine marble and has spectacular views of the sparkling Pacific Ocean. There are soothing fountains and concrete rows of offices and lab space which defy the eye. Designed by the world-renowned architect Louis Kahn, the Salk Institute of La Jolla has clean lines, a cool neutral color palette and an incredible open feel. It has won a number of awards and recognition for architecture and design and is also among the National Register of Historic Places. It is truly something you have to see to believe.

The Salk Institute in La Jolla offers guided architecture tours Monday – Friday at 11:45am. There is also an introduction about the Institute’s science. For more information, call Salk Tours at 858-453-4100, ext 1287.

The Salk Institution is dedicated to serving the community as well as education. The Institute’s High School Scholars program is one of three signature programs of Salk’s Education Outreach Department. Salk is also involved in volunteer programs and philanthropy both worldwide and in the La Jolla and San Diego communities.

THE SALK SCIENCE AND MUSIC SERIES

Merging both science and art at the highest levels to create a “unique environment to the benefit of humanity” has always been a top priority of the Salk Institute. The Symphony at Salk has been around for 19 years and is an incredible music series. Because the Salk Institute’s Nobel Laureates and National Academy of Science researchers have set such a high standard for discovery in biology and medical breakthroughs, the Salk has embarked on a new program. The Salk Science and Music Series is both amazing and inspiring and takes place over 6 Sunday evenings. Each concert in this new series features breathtaking performances by some of the most established and up-and-coming classical and jazz musicians. There are also intriguing discussions about the latest scientific discoveries by the Salk Institute’s world-famous scientists. Many of the events this month and next are already sold out, so get your tickets now! For the upcoming schedule, click here.

For more information on the Salk Institute in La Jolla, visit www.salk.edu.